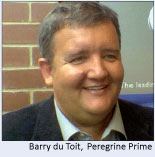 Until July 2007, a common criticism was that many South African hedge funds had existed almost entirely within the comforting embrace of a long, powerful and remarkably orderly bull market. Thus a fund in mid-2007 might boast a four-year performance record which, while impressive and promising, did not incorporate any seriously testing periods.

This criticism applied especially to long/short funds, which, with enough of a long tilt and perhaps some gearing, could ride the beta wave while earning alpha money. Such markets also help a common type of market-neutral fund, which tends to go long small-cap and short large-cap stocks thus essentially going long a spread that tends to widen in bull markets and then collapse in bear phases.

As a result, South African fund managers of all stripes (including traditional long only) enjoyed something of an extended holiday from coping with serious market volatility, see chart 1.

The middle of that chart shows the remarkable nature of the 2003-2007 bull market. However the right-hand side tells a different story. In case you missed it, a lot has happened over the last few years. It’s obvious just by looking at this chart that the last three years provided a genuine test of manager ability, including massive crashes, strong rebounds, strongly varying covariance regimes, and liquidity crises.

Looking at the details of this turbulent period is intriguing. The long bull market in one sense came to an end in July 07, as the first inklings of what was then understood as the sub-prime crisis started to impact the market. Note that the financial index began a continuous bear phase from April 07 all the way to the major market bottom in early March 09.

However the initial response of investors was to switch out of Financials into Resources, causing a tremendous rally in mining stocks which drove the Top40 to new highs in May 2008, when the consequences of the fi nancial problems for global growth started to become increasingly apparent.

The downturn became a complete rout, of course, in September 08, after the fall of Lehmans. That event hardly needs more commentary. However what is worth noting is the very diffi cult period from the low of Dec 08 to the re-tested low of March 09, a period of tremendous overall and sectoral volatility, followed by a remarkably strong, stable and correlated bull run to the end of 2009 (in itself posing problems of market timing for investors who had reduced their exposure).

The waters through which hedge funds have had to navigate during recent years then, have provided a remarkable test of their strengths and weaknesses. There were lots of ways to get things very wrong. Let’s look at the performance of equity-based South African hedge funds in 2008 and 2009 in the light of this remarkable background.

Table 1 gives some indicative figures for hedge funds serviced by Peregrine Prime. The numbers are weighted by funds under management (and thus are not artificially infl ated by small funds), and are after fees. Survivorship bias exists but is not significant. 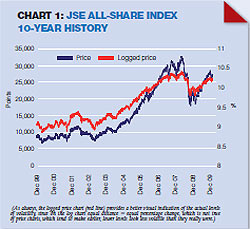 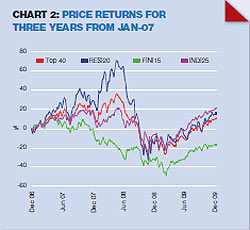 Peregrine focuses specifically on funds trading in the South African equity markets, and thus we do not show any data for interest-rate or other categories of funds.

We also show some comparative numbers from the broader universe covered by the HedgeNews Africa journal (www.hedgenewsafrica.com). Figures are similar except in the case of the long/short category, in which the Peregrine subset has a longer bias. We also show the core asset class indices for comparison in table 1.

Obviously these results are pleasing, and in addition to that they are also very much in line with what one might expect from these categories of funds. We’ll look at this in more detail shortly, because we really need to combine these numbers with the 2008 bear market returns.

It’s worth getting one thing right before continuing, though. It’s always important, and frequently ignored, to recognize the fact that the general category of “hedge funds” has very little analytic value, since there are only a few common characteristics across hedge funds (ability to short and gear, lack of regulation, performance fees) and these are compatible with a very wide range of styles. It follows that comparing aggregates of hedge funds means very little. For example, a comment occasionally seen of late amongst the more superfi cial media commentariat is that South African hedge funds have “performed better in recent years than their international counterparts”. Since the sorts of international hedge funds which bore the brunt of the crash of 2008 – funds playing in the interest rate and credit markets – barely exist in South Africa, this comparison is rather meaningless.

However South African hedge funds did do well. To look a bit more deeply at this, we will confine ourselves to the equity long/short and equity market-neutral styles (multi-strategy is too broad, stylistically), and at returns across 2008 and 2009. These two fund styles, of course, massively dominate the universe of South African hedge fund offerings, see table 2. It should be noted that there is some survivorship bias in the 2008 numbers, since some funds (typically funds which were theoretically long/short, but in fact were often basically geared long funds, or else market-neutral funds long of highly illiquid small-caps) did do especially badly and closed their doors. There were not too many funds in this position, however, and they raise other matters of mandate, risk and investor education, which we will not discuss here.

The results for 2008 and 2009, then, at the level of the mean, show that hedge funds in these two relatively clearly defined categories performed according to reasonable expectations, and performed well, given the environment. Apart from outperforming the key market indices, their level of volatility was also lower. For market-neutral funds, in the current infl ation and interestrate environment, 2009 was a solid return, while 2008 was below expectations, but not excessively so. The 2008 underperformance (against naive style expectations) seems to have resulted from three issues, all wellknown aspects of the market-neutral style.

Firstly, not all market-neutral funds are factor-neutral, and funds whose mandates allowed their managers to take sector bets, such as banks versus resources, were often vulnerable to the very diffi cult and volatile sector fl uctuations during the year. This is a matter of mandate, and it simply refl ects the point made many times here that investors need to decide against exactly which factors or sectors they want their funds to remain neutral, and ensure that this is captured in the fund mandate. Secondly, a characteristic of some market-neutral hedge funds is that the funds often have a tilt towards smallercap and/or less liquid stocks, and that these stocks underperform when a market falls by enough to impact on investor risk appetites (and 2008 was more than enough to dampen any appetite!). A third factor is that funds with high levels of leverage faced problems of heightened volatility, cash flow and the substantial decrease in appetite for gearing amongst both investors and lenders.

The long-short funds (given their style) performed very well in 2008, and solidly enough in 2009. The 2009 numbers correspond to a beta of around 45% against the All-Share, lower than the usual median level for long-short funds, which probably reflects the fact that few, if any, long-biased active managers (hedge fund or traditional), who had reduced exposure through 2008, managed to resume their usual levels of exposure exactly at the market low. As a result they typically underperformed what was (with hindsight) a remarkably strong and steady rally from the March lows.

So performance in this set of categories was satisfactory over a testing period, on the average. That analysis, of course, is at the level of the mean. An important additional point is that the cross-sectional volatility of returns across even these relatively well-defined hedge fund styles is very high, and this is entirely natural because each fund typically has a customised mandate. Thus the Peregrine Long-Short category of funds for 2009 has returns ranging from over 50% to only marginally positive. This is a very wide range of returns, and may suggest that the category lacks any coherence. It is certainly a good reason not to use a random selection of individual fund results as some sort of indicator of the general state of the sector. You can fi nd whatever you are looking for.

This sort of range suggests that investors should look carefully at the particular fund they plan to invest in, and not assume too much from its membership of some general style category. On the other hand, though, it is noticeable in our numbers that the range of returns is much narrower amongst the larger funds: restricting the universe to the 10 largest funds more than halves the