For most investors 2008 provides nothing but bad memories. It was a long year.Starting with the first inklings of sub-prime problems in late 2007, then a heady bull run on the Johannesburg Stock Exchange on the back of a global shift into resource stocks,before everything turned nasty with the credit crunch following on the fall of Lehmans in September 2008.

The All-Share Index fell some 44% from its high in May 2008 to its low in November of that year.After a brief rally,the bear run continued into early 2009 with renewed bad news from some financial institutions, before a substantial bull rally from March onwards (albeit from a very low base).

Despite the immense pain, that turbulent period provided the sort of test of financial institutions that cannot be replicated in artificial simulations or theoretical models.Globally the level of leverage in the financial system,the business model of investment banks,the role of complexity and innovation in finance,as well as the behavioural consequences of executive remuneration policies all came under close scrutiny.

What can hedge fund managers, investors and intermediaries learn from that period? In fact,most of what happened simply emphasised, in a rather dramatic way,what we have always known.We list some of those fairly standard (but often neglected) points in the box below. In the body of this article we will focus on two key issues, which have been especially interesting over the last two years: leverage and factor exposures.

Probably the most widely agreed view of the credit crunch crash is that the world was massively and unsustainably over-leveraged. The sorts of equity-based hedge funds within Peregrine’s Prime Brokerage are not typically the style of hedge fund that require massive leverage, but nevertheless deleveraging was a key feature of 2008,and funds have only slowly increased their gearing in 2009.

Chart 1 shows changes in net and gross exposure (as % of NAV) for the 20 largest funds on the Peregrine platform (unweighted, typically equity long-short mandates). As can be seen, deleveraging took place both in terms of gross exposure (managers reducing bet size in general) and net exposure. 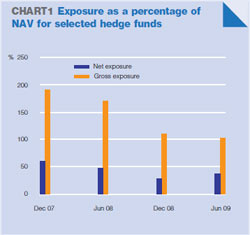 The latter is interesting, since it results from a number of factors. Some of the global reduction in net exposure (relative to NAV)

Gross gearing went from 170% in June 2008 to 111% in December 2008, a very substantial deleveraging and,interestingly,has remained at that level, a phenomenon that presumably reflects a persistent change in risk appetite amongst both fund managers and investors. Net exposure, on the other hand, while falling from 48% to 29% over the same period, has picked up fairly quickly to 38% in June 2009,as the rally off the March lows kicked in.

The reduction of leverage disposed of one concern previously expressed about the likely behaviour of hedge fund managers in difficult times. It had been speculated in the literature that the nature of the hedge fund remuneration formula might lead fund managers well below their high-water mark to increase their bet size. Essentially the concern was that some managers might be enticed into a game of double or quits because of a gross misalignment between the interests of the fund manager and those of the investors.

Nothing like this happened, either in South Africa or globally. Fund managers generally reduced leverage and chose to ride out the storm.That strategy cannot be faulted: if anything the reduction in leverage could have come earlier, but that is of course with the benefit of hindsight.

Naturally long-biased funds (and of course especially leveraged long-only funds) were the worst affected by the waterfall crash.

However, an additional feature of the crash period was the wild swings in returns between sectors, in particular between the financial and resource sectors. One consequence of this is that market-neutral funds whose style was to take sector bets, and who got some of those bets wrong, often displayed tremendous volatility (and thus sometimes substantial losses).

Chart 2 shows the differential monthly returns on the Resi20 and Fini15 (i.e.Resi20- Fini15) for the last four years, together with a six-month trailing Mean Average Deviation. 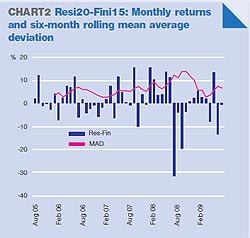 Two points follow from this. The first is that “neutrality” means whatever it is defined as in the fund mandate.

If market neutrality is only defined as beta neutrality (or just as a net exposure of zero), then sector bets are allowed, and sector bets can be very volatile. Investors not wishing to take on sectoral (or other factoral risk) need additional clauses in their mandates. In theory an overall risk limit (VaR or volatility) would restrict the size of sector bets (to the extent that they have been historically volatile). However, direct limits on factor exposures are a more effective way, both because they are more specific and because they involve less model risk than dynamic portfolio risk measures.

In looking at a breakdown of funds, it is noticeable that the only sort of funds that behaved reasonably normally during the crash period (within the equity fund universe) were market-neutral funds which only traded within-sector pairs, and did not have any substantial hidden factor bets.

The second point is that the volatility of the sector swings was extremely high by historical standards. Thus even funds which

allowed only limited sector exposure may have experienced more volatility than would normally have been expected.

Some Lessons of the Crash